ZTE’s Spro line of mini smart projectors have always been curiosities. Combining the functions of a smartphone, projector, mobile hotspot, and USB battery into one chunky device, the Spro (pronounced “ess-pro”) units have always seemed like an interesting idea, but with really niche use cases. Still, ZTE has had success with two generations of the Spro, and its latest model, the Spro Plus, takes its crazy combination device ideas further than ever.

The Spro Plus is bigger and more powerful than its predecessors, with an 8.4-inch, 2560 x 1600 pixel Super AMOLED display, making it more of a tablet-sized device than the earlier versions. It’s powered by a Snapdragon 801 or 625 processor, comes in both Wi-Fi and LTE variants with support for VoLTE, and runs Android 6.0 Marshmallow. Its projector is a 500 lumens, WXGA resolution laser unit, which is more than twice as bright as the projector in the Spro 2. The Spro Plus also has video conferencing capability with an external camera and two four watt JBL speakers. All of this is housed in a frame that’s significantly thinner than the Spro 2 and is powered by an enormous 12,100mAh battery. ZTE says that’s good enough for at least four hours of streaming video projected on a wall.

ZTE really wants the Spro Plus to be “second most used device after your smartphone”, which helps explain why it’s tried to cram so many features into the box. But while the Spro Plus definitely looks cooler and can do more than the Spro models before it, we’ll have to see if anyone outside of a traveling salesperson bites on ZTE’s offer when it hits stores this summer for a to-be-announced price.

panGenerator based in Poland have created a new kinetic audio video sculpture for Disney that takes the form of a Mickey Mouse inspired installation, which can be seen in action in the video embedded below.

Named the MICKEYPHON the installation has been created to listen for sounds in its surroundings and will then rotate into the direction. It then samples them to create and playback rhythmic patterns based upon the sound that it has heard.

Its developers explain a little more about the inspiration and functionality of this very unique interactive kinetic installation.

The visuals displayed on the custom cylindrical RGB LED matrix are audio-reactive, tightly integrated with the music output of the installation. The piece invites both children and adults to experiment with creating sounds using their voices,
clapping their hands or using the provided instruments and observe their influence on the kinetic, visual and audiatory output of the sculpture. 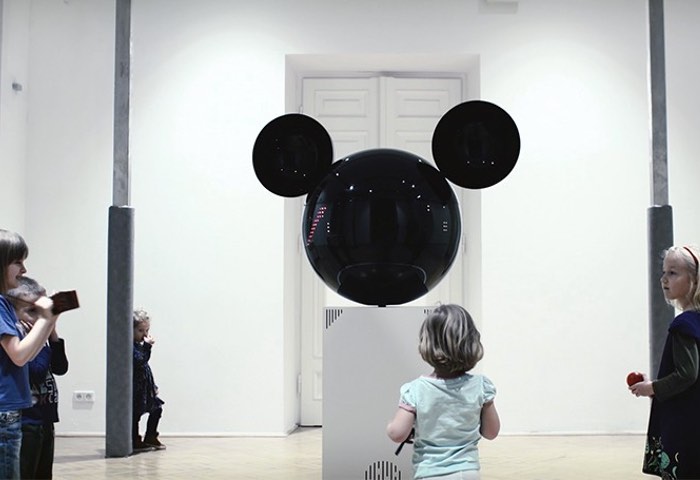 Jump over to the panGenerator website for more projects created by the team and more details about the MICKEYPHON which was inspired by Mickey Mouse and created for Disney.